What an amazing surprise!! I seen the Windhonden Info Site and OMG, my sweet Barzois are on the Barzoi TOP list in The Netherlands!! They started on only two shows!! IntCh. Triumphator Zarina Zelebsel 13., and her lovely brother: Ch. Triumphator Zophiel is 3rd place!! Huge thank You Ron Moerkerken for sharing this link!! And of course thanks a lot to the honourable specialist judges! 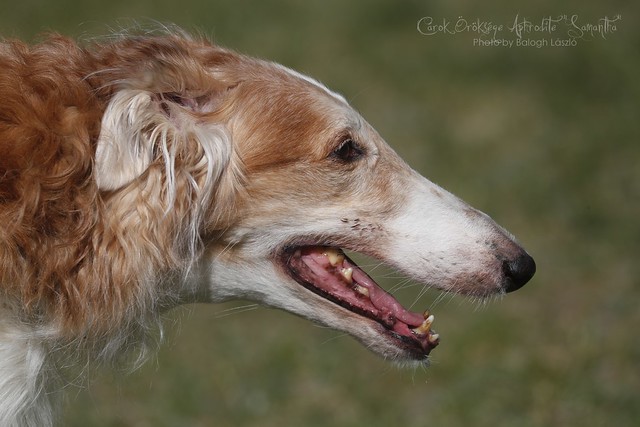 On this show the judge was the honourable Barzoi Breeder Mr. Andre van den Broek the owner of the dutch Modnyabistru Kennel, who give amazing titles to Our dogs on this big show: MultiBIS. Ch. Triumphator Zophiel "Zozito" won Excellent 1, Champion Class Winner, CAC, CACIB, BOB, HOLLAND CUP WINNER 2015! His sister the cute Ch. BIS. Triumphator Zarina Zelebsel the second Best Barzoi on this show after his bro and she won Excellent 1, Champion Class Winner, CACIB, CAC, BOS, HOLLAND CUP WINNER!! So with this CACIB title Zarina finished her INTERNATIONAL CHAMPION, she is only 2,5 years old! 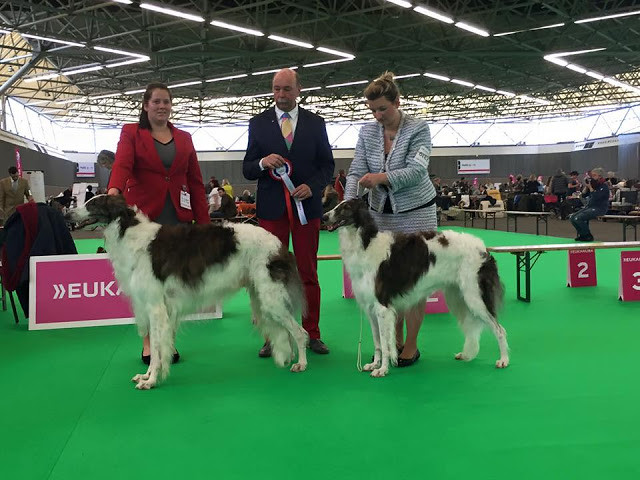 2015. 12. 13. Amsterdam Winner Show:
This show is the biggest show of Netherlands where if Your dog won the WINNER title he get 2 CAC! The honourable specialist judge was Mr. Williem Buitenkamp /NL/, who give these titles to Our Triumphators: Zozito was the Best Barzoi again!! So he got Excellent 1, Champion Class Winner, CAC, CACIB, BOB, AMSTERDAM WINNER! - So he got the Qualification to Crufts 2016 also! Our fairy Zarina was not in "show feeling" I think she was very tired after the long traveling, but she won Excellent 1, Champion Class winner titles!
After the shows in Amsterdam we was visiting the towns nearby to Oudenbosch. St Willebrord, Breda, Amsterdam and Roosendaal - both are very nice place! Soon the Friday is coming and we are traveling to Our next stop, the belgian capital city: Brussels! 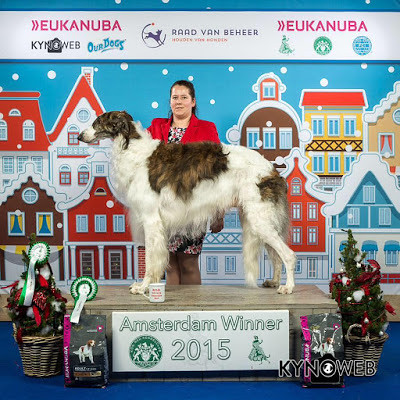 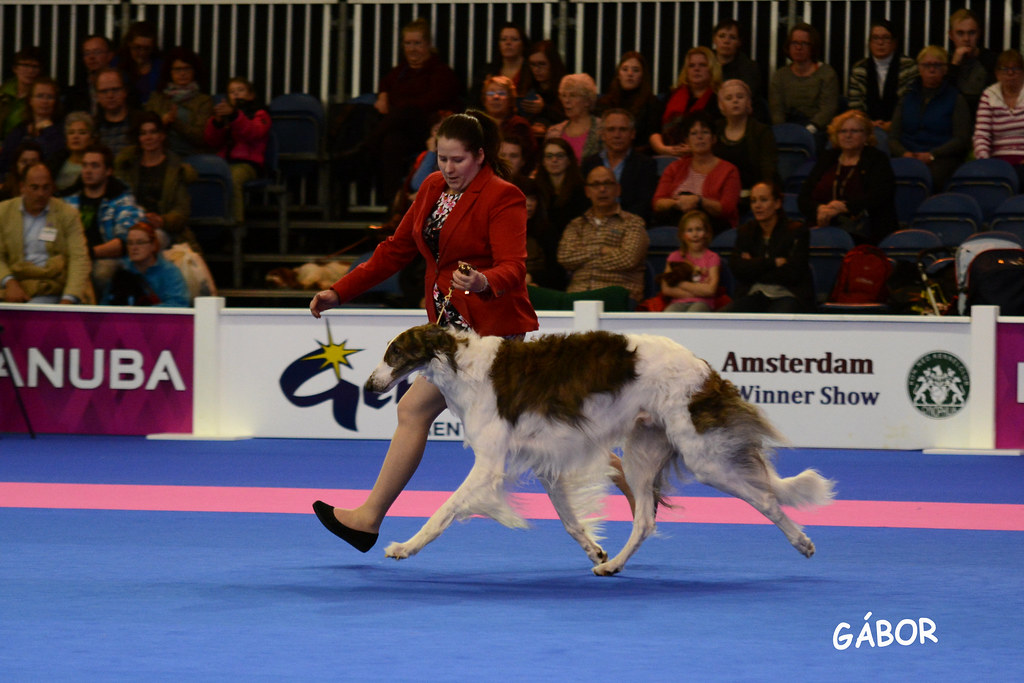 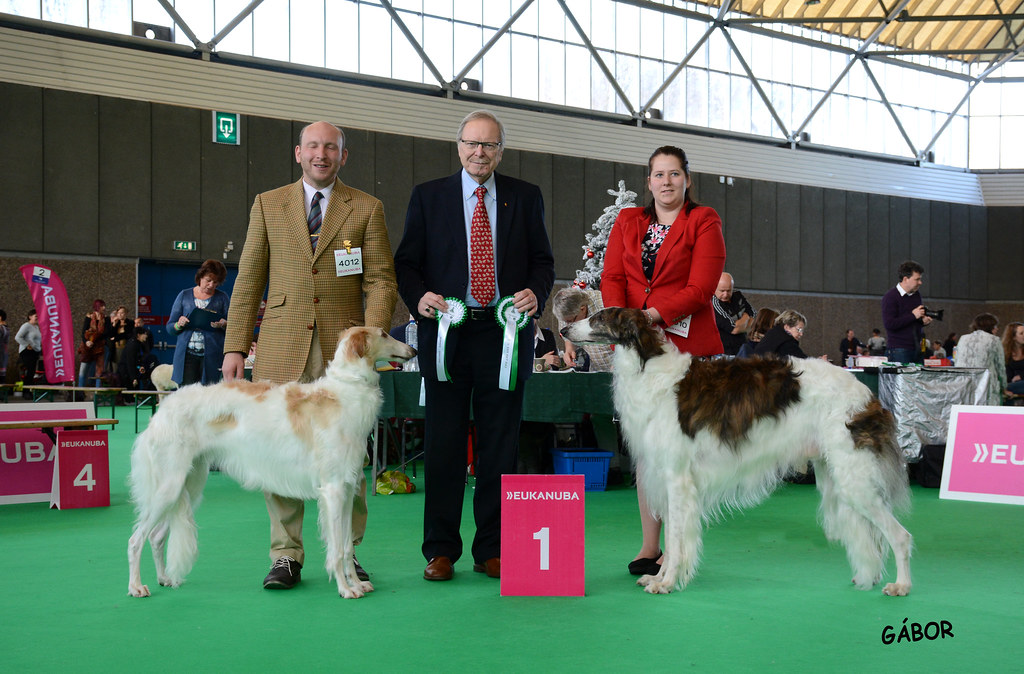 2015. 12. 20. Brussels Winner:
This show is the biggest show of Belgium, The Brussels Winner Show, where the judge was Mr. Róbert Kotlár for the Barzois and a few popular Sighthounds breeds, as Whippets and Greyhounds. Our sweet prince Zozito was the Best Male Barzoi! So he got Excellent 1, Champion Class Winner, CAC, CACIB, BOS, BELGIAN WINNER, the one and only Barzoi from Hungary, who won the BENELUX WINNER titles and he got the Crufts Qualification to 2016 also again! Our little princess, Zarina has not good show feeling, but she won Excellent 2 in Champion Class. 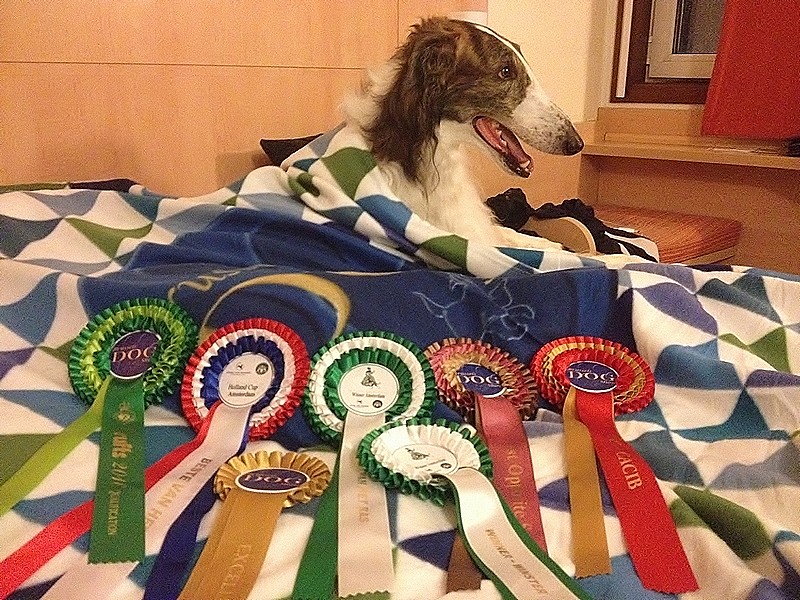 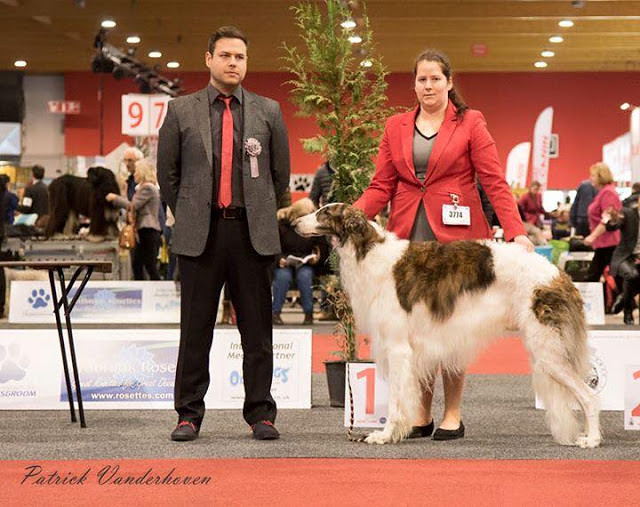 Really big pleasure to me that we meet Our lovely friends from Belgium, - Netherlands and Franch!
I like say huge THANK YOU to Our great friends: Lies, John and Daniel for they hospitality!! And to the honourable specialist judges for these really nice results and of course for the super photos to Tony, Veronique, Szalánczi Gábor, Chantal & Kynoweb!

I entered to this show our two beauties: HJCh. MultiBIS. Triumphator Zophiel "Zozito" who was the best Barzoj on this show, he got Exc1, CAC, BOB and later in the best in show program he won Reserve BEST OF GROUP, so he finished his Hungarian- and Hungarian Show Champion titles! His lovely sister, Triumphator Zizuph "Nina" made great job too, she got Exc1, CAC and BOS titles! Huge thank You to the honourable judge: Mr. Hartmann György! - and special thanks to my friend: Kozák Zsolt for his handling of our Nina! Thanks a lot for the photos to Radnóthy László (Kutya Egy Dolog) & Horváth Balázs (dog-foto.com)!! 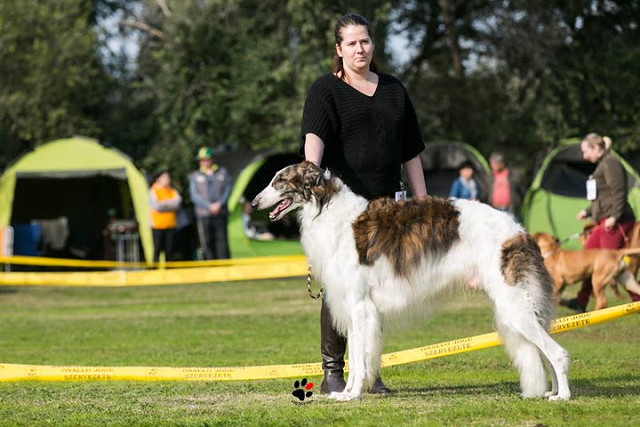 I entered just one dog to this show, he was HJCh. MultiBIS. Triumphator Zophiel *Zozito* who made great jub in the rings. So he won Exc1, CAC, BOB and BOG! I thank you very very much to the honourable judges: Mr. Lupkovics Gellért (breed judge, who breeding sighthounds from many years ago) and Mr. Jenei Attila! Thanks a lot to my friends for this day, it was very funny and happy day!

On the morning show started my two dogs: HJCH (and from now) HCH. HSCH. Triumphator Zarina Zelebsel won Exc. 1, CAC and BOS! Her brother HJCH. JBISS. Triumphator Zophiel won Exc.1, CAC, BOB, Best Of Group and BEST IN SHOW!!!
On the afternoon show started the lovely HJCH. HCh. HSCH Triumphator Zavael "Mitsuko" won Exc1, CAC, BOS!! After the afternoon BIS program was The absolutely Super BIS! My Zozito won it!! Sooo he is the absolute SUPREME BEST IN SHOW & OMÉK Grand Prix Winner !!!! At now I have not words how proud and Happy I am!! Huge Thank You to the honourable judges: dr. Váczi-Balogh Zsuzsanna, Mr. László István & Mr. Korózs András (the president of the Hungarian Kennel Club) and thanks a lot to my friends, who was with us in this rainy day!! So and thank you for the lovely photos to Radnóthy László (Kutya Egy Dolog Facebook Site owner)!  Huge congratulations for the other winners too!! 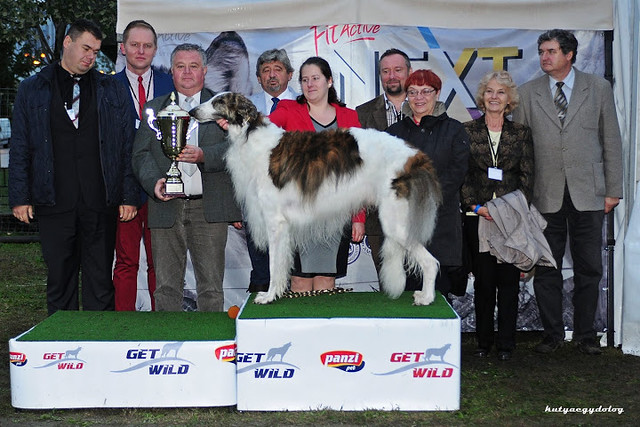 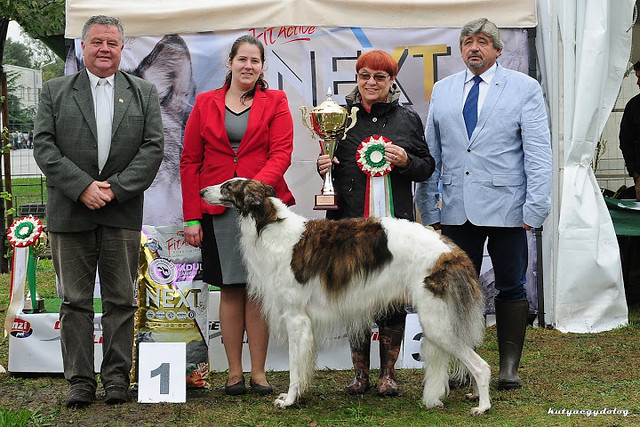 Our two lovely ladies started in open class on this show. HJCh. Triumphator Zahariel "Lujzi" (owned by Viktória Kecskés) got Excellent 2nd & reserve CAC and her sister, HJCh. Triumphator Zavael "Mitsuko" (owned by dr. Zsuzsanna Bebesi) won the class and finished as Best Female Barzoi in Show, and she got Excellent 1st, CAC and Best Opposite Sex titles from the honourable judge dr. Jakkel Tamás! Thanks a lot to the judge and many many thanks to our ladies' kind owners also!

The lovely HJCh. Triumphator Zavael "Mitsuko" started on these shows from the Triumphators and she made great job in the first times in strong open class! She got 2x Excellent 1st, 2x CAC, on first day she got resCACIB and on second day she got CACIB and BOB also! Huge thank you to the owners and special thanks to to honourable judges: Mr. Sinisha Pavlovic (SRB) and Mr. Cristian Stefanescu (RO)!

I can not thank you enough to Jeannette Rüttimann (Kuskayas Barsoi Kennel) that she brought our love: Triumphator Zarenerbe "Ladianov" to this show!! I got from her one of the most biggest present! I can't stop the "happiness cry" when I seen sweet Ladianov! I thank You very very much!!!

I am really proud of Our sweet only 2 years old Triumphators, they was the most successful Barzois on the WDS from Hungary!!

(15 males was is open class; 16 females in open class)
I am very happy to meeting some of Our friends over the world!!!
Huge thank you to the honourable judge: Mr. Boris Chapiro from France! Thanks a lot to our friends: Balázs, Dóri, Ildi for they help and photos on the shows!

Photos and others will coming soon!

I entered our two youngsters to this CACIB Show. Our beautiful young male HJCh. JBISS. Triumphator Zophiel *Zozito* won his class and got CAC Sk later he won the 2nd Best Male, got Reserve CACIB after the BOB winner champion male from Russia. Our sweet fairy HJCh. BIS. Triumphator Zarina Zelebsel got Excellent 2nd with Reserve CAC after the BOS winner lovely female from Czech Republik. Zozito & Zarina are just 2 years old and started in Open class, but I think they got nice results. Thanks a lot to the honourable judge, the president of the Slovakian Sighthound Club: Mr. Vlatislav Vojtek!

Only one Triumphator youngster was on this show, HJCh. Triumphator Zizuph aka Nina started first time in Open class. She got lovely results: Excellent 1st, CAC, Speciality Winner Female & Best Opposite Sex from the honourable breeder judge dr. Gólián-Béres Ágnes (Petrodvorec Kennel)! Poor Nina stepped on a "king melon" spike in first run in the ring; but I am very proud of her and happy for the nice results! Thanks a lot for the correct judgement to Ágnes!

Only Triumphator Zarenerbe "Ladianov" started on this show and he got the Exc. 3rd place from dr. Tamás Jakkel. Thank You to the judge; and special thanks to Ladianov's super owner: Jeannette for your super job with him!

Coursing & Track Racing Training at Alsónémedi
We were with our three Barzois: Zozito-, Zufi & Chanel at Alsónémedi. Zufi and Chanel ran on Coursing and they did the first step, made successful solo licence. Our Zozito ran on Racing track. With Zozito we have many things what need to study, first time is the "dog muzzle".

Coursing Racing at Freiburg
The beautiful Triumphator Zarenerbe "Ladianov" started on this race, but unfortunately he lost the rabbit. :( Thanks a lot to Barbara Wickli for the amazing photos!

HUGE THANK YOU FOR THE LOVELY OWNERS FOR THEY SUPER WORK WITH THEY TRIUMPHATORS!

2015/02/12-13. Budapest /H/ FEHOVA Winter Dogshows
I entered to only two days. On the first day HJCh. JBISS. Triumphator Zophiel started and he won amazing results, he got Excellent 1, CAC, CACIB, BOB & 3°BOG... On second day was the last day to us and our two youngsters started on the show, HJCh. JBISS. Triumphator Zophiel & HJCh. Triumphator Zizuph, both won they class and got CAC with resCACIB titles, and Zophiel was the Best Male-2nd and Zizuph/Nina was the Best Female-2nd. They got this titles after two nice adult-, champion dogs. I am proud of them! Thanks a lot to the honourable judges Mr. László István & Mr. Erdős László!

We had lovely day at Alsónémedi and our Barzois made nice job! The lovely Triumphator Zahariel "Lujzi" (Owner: Kecskés Viktória) finished her Coursing Licence; Triumphator Zuphlas "Zufi" (Owner: Gondy Krisztina) first time try the coursing, and he love it! Triumphator Zarina Zelebsel and Chanel goes training and my Samantha ran a short round for fun. They enjoyed! Our little Zarina made the breeding licence with ability test (by on coursing track).

2015/01/17. Ljubljana /SLO/ CACIB Show
We entered just our sweetest fairy: HJCh. BIS. Triumphator Zarina Zelebsel. She made nice job and she was the best (from 8) female Barzoi  on Saturday's show. She got lovely titles: Excellent 1st, CAC, CACIB, Best Female and Best Opposite Sex under the honourible italian judge Mr. Pierluigi Buratti. I handled the amazing Barzoi male; Razumov aus dem Zarenreich (Von Semjonovski Barsois from Austria) on 3 shows and he won the all strong open class and he was the Best Male-2 on the Speciality.